WE MADE IT!!! Tonight is hometown dates. Arie will visit Kendall, Other Becca, Lauren, and Tia in their hometowns.

Right off the bat she reminds us that she was formerly known as Taxidermy Blonde by taking him to a taxidermy room. She is v into this and he’s v not. They are going to mount rats (this speaks to me because I recently had a rat in my attic and might actually have a corpse on a trap that I can donate to this bizarre hobby date). After she’s done forcing him to fondle empty rat bodies they go get drinks and he expresses that he is nervous to meet her family. Kendall has an identical twin Kylie but until I see them in the same room at the same time I’ll assume it’s just Kendall with darker lips and an excuse to be a psycho.

They arrive  at her parents home and Arie has an armful of gifts like he’s Santa’s little helper. It turns out twin sister is very much a real person who doesn’t look that identical to Kendall so there’s no bait-and-switch opportunity here. Kendall’s dad is immediately staring Arie down with the “shotgun and a lot of land and no one will miss you” dad-stare. Twin tells Arie she’s not comfortable with the amount of “space” between them and is shocked that he is planning on proposing at the end of this. Twin has some very analytical feels about this relationship and tells Kendall she isn’t sure about any of it while they sit in some sot of craft-bead room (I was very distracted during this scene. There is a bee stapler over Kendall’s right shoulder that my mom also owns and I couldn’t stop laughing about that).

Kendall’s dad is a straight shooter. He gets right to the point and tells Arie he does not think Kendall would just accept a proposal if he gave her one, but they will support her if this is what she wants. At the end Arie thinks things are going well and Kendall says she’s also falling for him. I think she has a pretty good chance at getting a rose later tonight.

I am not kidding when I type that Tia is from Weiner, Arkansas. Weiner. Arkansas. Weiner is an actual city in the United States. The more you know. Tia breaks out the big guns and takes Arie to the race track. They are going to race in cars that do not appear to be safe in any way. He burns rubber around the track a few times and tells Tia she did a really good job, although I remain unconvinced that her car ever actually moved. She rattles off the list of people that he will be meeting later and I’m surprised to hear that he won’t be meeting Raven since I have learned that Raven and Tia are best friends (Bachelor nepotism strikes again!!!).

Tia is doing an awful lot of talking about other girls, and I know it is a reality, but like, do you have to remind your family that he’s living out a Sister Wives situation? That won’t go over well with a dad. It wouldn’t go over well with my dad. Arie and Tia’s brother, Jason, go outside to talk and Jason tells Arie he’s heard about his nickname “The Kissing Bandit”. Arie says he didn’t give himself that nickname which, while true, might not be the best way to address this nickname with your girlfriend’s brother.

Tia’s dad also comes in hot, he’s already google-vetted Arie and says he’s heard Arie is a playboy. Arie tries to quell his fears by saying he’s sent other women home because he saw something special in Tia. Arie asks for his blessing and he grants it because Tia “really digs him”. This date also felt like it went well so I’m pretty sure she’ll get a rose but I don’t think he’s as into her as he is into Kendall. But maybe that’s just because he got botoxed in LA and can’t show emotion anymore.

These next two hometown’s better bring some drama because these first two have gone way too well for my liking. I need more threatening dads and brothers.

I mean this in the nicest way possible, the hair and makeup team have really done Other Becca some favors. She’s a pretty girl, but today she looks ah-may-za-zing. These two love birds go apple-picking and carve their initials into a tree. There is never any fluff with these two, it’s always very honest and they get right to the tough conversations. I don’t know if that’s a good thing or a bad thing.

Back at her house, her family is already saying this is moving too fast and they don’t think it can work. BRING ON THE DRAMA!!! Other Becca’s family describes her as “not dramatic but she’s a Minnesota girl”. I’m going to check with my cousin on what exactly that means. Uncle Gary is waiting anxiously for Arie’s arrival, and haphazardly swinging a cane around. The family is not buying Arie’s sales pitch for the Bachelor love-finding-formula. Uncle Gary pulls Arie outside and I’m hoping there’s a sword in this cane. Uncle Gary discusses the hurt that they have seen as a family, and says he doesn’t want Arie wasting Other Becca’s time.

Other Becca asks mom if Arie were to ask for her hand, would she give it? Mom says no. She’d need more insight to the relationship and where they are before giving that. Mom also talks to Arie and she asks him what he thinks makes committed relationships work. He plays all the right cards and says he looks at his parents relationship and takes a lot from that. He admits he’s falling for Other Becca and asks for her hand in marriage and mom says she will give a blessing to honoring whatever Other Becca’s choice is. I think this date went better than Kendall’s, so I’m not sure what Lauren’s chances of getting a rose are anymore. 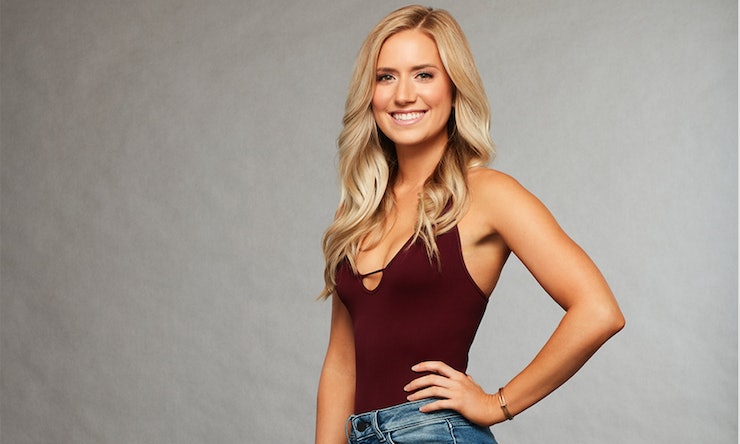 These two… I can’t even with this date. These two ride horses on the beach and hold hands from their respective horses. They go up to the top of an observation tower and look out over the city and kiss when the sun is right behind them (hey insta photo!!).

Her family’s home is beautiful and I would like to conquer about 30 DIY projects in there. Arie and Lauren set up for this inquisition in a loveseat across from the entire family. This awkward family dinner is everything I was hoping I’d get out of this All-American Military family. Arie excuses himself from the table because he is sweating like a whore in church. In a quiet moment, Lauren’s aunt confides that she would support an engagement between Arie and Lauren because she trusts Lauren. This seems like a fascinating revelation since Lauren has been engaged two times, and neither of them have led to a changing of her last name.

Arie goes outside with Lauren’s dad and tells the story of going over to Iraq for a USO tour. Her dad about runs inside to get (I assume) grandma’s heirloom diamond, passed down from the Mayflower ancestors. Mom is much more concerned about Arie’s ability to compartmentalize these relationships and doesn’t trust that he actually loves her daughter. Too late mom, dad has already handed her over. There are a lot of concerns coming out of this date, and I feel like he didn’t get any answers about her and who she is. Lauren tells her mom they have a special connection, and she doesn’t think he would tell her he was falling in love with her if he was falling in love with the other women. Oh, you poor sweet summer child, he’s telling all of you that.

Arie tells Chris Harrison he has no idea what he’s going to do, and then walks out of the room after talking to the girls for 30 seconds. There’s a lot of in-through-the-nose-out-through-the-mouth breathing, but at least they are breathing! Arie asks to speak with Kendall one-on-one, leaving Other Becca, Tia, and Lauren to imagine what they could possibly be talking about. Tia says that Kendall makes the least sense when it comes to relationships, a fact I’m shocked she hasn’t shared with Arie given her tattle-telling performance last week. Sorry, I’m not over it. I liked Bekah.

Arie wants Kendall to reassure him that she believes she can be ready for an engagement with Arie because he doesn’t want to keep her and send someone else, who is ready to get married, home. She says there are a lot of things about him that she feels good about, and that she loves him. She admits she wouldn’t be ready for an engagement tonight but she could be in the future. They come back in and we’re ready to give out roses.

Other Becca gets the first rose.

Lauren gets the second rose (I did not see this coming. He knows she isn’t actually Emily, right?)

Kendall gets the final rose. I also did not see this coming. I really felt good about his relationship with Tia, and clearly so did she. This significantly raises her chances of being the next Bachelorette though. In one of the most heartbreaking moments of the season, she asks him, with tears spilling over her waterproof(!!!) mascara, ‘What did I do wrong?’ . Oh boy, Arie. Her dad is going to find you on the google and he is going to hurt you. Good luck, my friend.

We’ll be back on Sunday with the Women Tell All Special, and then Monday night we’ll take the final three to Peru. Buckle up!