Here we go. Twelve remaining contestants. Five of them are blonde. Four of them wore white tops and denim shorts into Fort Lauderdale today. I CAN’T TELL ANYONE APART ANYMORE! This might require wine. We’re going to try nicknames for the blondes this week and see how that goes.

Dead-Grandpa-Blonde is back, which is only weird because I thought Arie said she would not be returning. Guess we’ll see how he handles that later. On to the one-on-one date. Arie takes Mom-Blonde on a yacht date where they make out on the boat and on a jet-ski. The girls back at the house learn how to use a telescope to spy on the date and get to watch them play tonsil hockey. Suckers. At dinner Arie gets right to the point and asks her about her ex and how they co-parent. She talks about being afforded a life where she wanted for nothing, and then seven years and a six month old later they separated. Ex is now remarried and has a new son with new wife. It seems complicated and she seems very sad about it. He tells her he would never waste a moment of her time and offers her the rose. She accepts! To her the rose says Arie is accepting her for her. They go to a private concert in the auto-museum. Mom-Blonde names the singer like she’s got her body of work on her iPod, but the producers clearly fed her this singer’s name. I’ve never heard of her. They dance to a song with the lyrics “you caught me in a moment of weakness” and this really speaks to Mom-Blonde. Not cliche at all. Nope.

Group Date: Everyone but Tia and Mom-Blonde 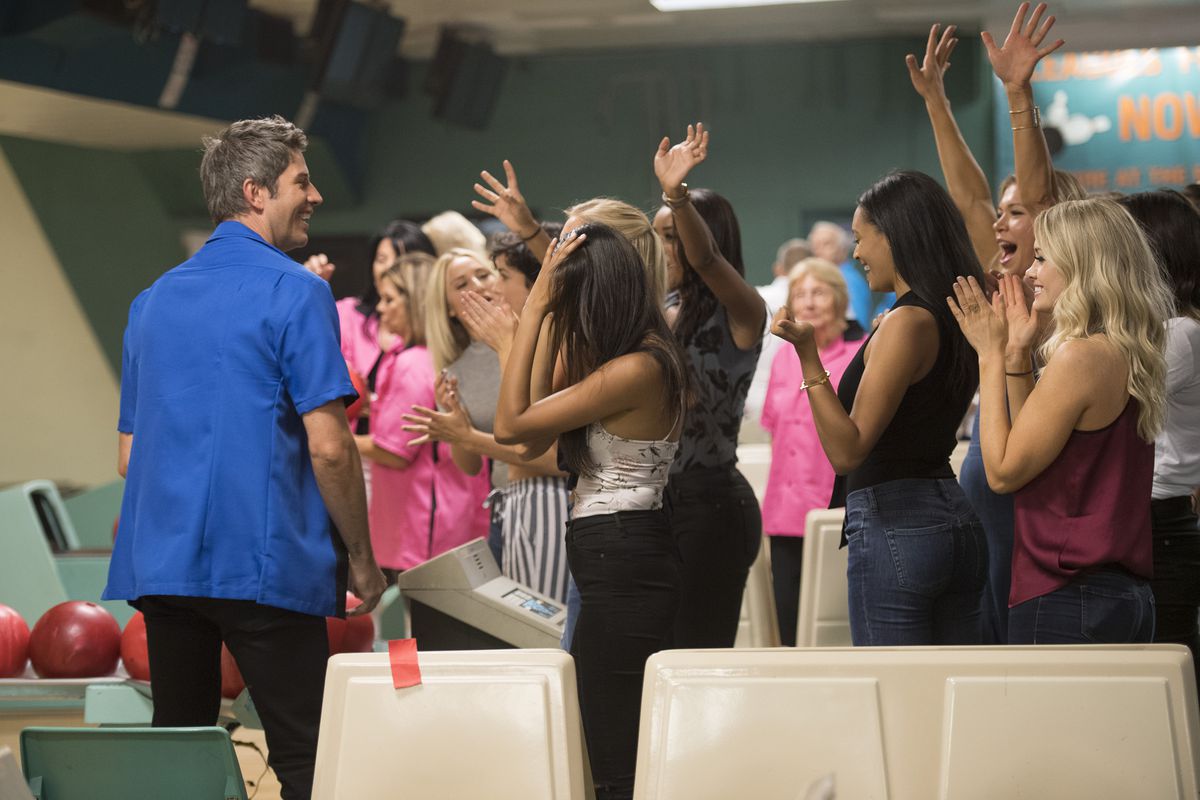 They’re going BOWLING!!! There is immediately some competition for Arie’s attention but more for the pitcher of beer. They have to pick teams and the winning team will get to attend the cocktail party, losing team goes back to the hotel. A very weird chant breaks out from one of the blondes and Crazy-Blonde leads her team in a prayer? I think it’s a prayer. Whatever it was works because Crazy-Blonde’s team wins handily. Arie ultimately decides to bring everyone to the cocktail party and Crazy-Blonde looks like she’s about to explode. She doesn’t even want to hold her team’s winning trophy anymore. That’s how you know it’s serious.

Crazy-Blonde apparently had a full-blown meltdown on the bus but we never saw it. She feels betrayed because he didn’t consult her team when he invited everyone to the cocktail party. She’s looking for a partnership, not just a man to tell her what to do. She’s not going to the cocktail party and her bags are packed. (Spoiler Alert: she’s not actually going anywhere, she just wants him to come to her. and he will) Crazy-Blonde gets exactly what she wants after girls make the fatal mistake of telling Arie she will not be attending the after-party. They tell him Crazy-Blonde won’t be attending before he even warms up his seat, and he immediately scampers off to her room to talk to her. Sucker.

AND WHERE ARE YOU, ARIE? Upstairs with Crazy-Blonde, just like she wanted. She keeps pouting and he tells her to stay upstairs which is actually the ballsiest thing I never expected out of him.  Crazy-Blonde still makes her way down to the party, surprising no one. The rest of the girls are legitimately done with her so she tucks her tail and runs right back up to her room. He gives the rose to Miscellaneous-Blonde after they talk about favorite colors, how he likes his eggs in the morning, and how she likes her coffee (coconut milk, if you’re curious).

Arie and Tia are exploring the Everglades, it’s a very country date for a very country girl (his words). I can’t decide if I appreciate his desire to feed into her country, or if I wish he’d just plan regualr dates with her. They take an airboat through the Everglades and arrive at a house where they enjoy a typical Everglades meal of frogs and  deep-fried corn. At dinner Tia talks about having a Doctorate, and working in physical therapy and says she doesn’t see herself ending up in Arkansas. They discuss religion and she says she usually falls for guys that she needs to fix but says Arie isn’t that. She tells Arie that she’s falling in love with him and he gives her the rose.

The only real important thing that happens at the cocktail party doesn’t even include our bachelor. The girls are gossiping about Crazy-Blonde and she overhears them. She decides to try and diffuse the situation because “Haters gonna Hate”. Crazy-Blonde says she’ll talk to anyone one-on-one but a group setting just opens her up for attack and she doesn’t want that. Taxidermy-Blonde, Tia, and Bekah M. all confront her and this will probably not shock you, the conversations are not productive. But, their opinions of her don’t decide her rose-colored future. Bekah tells Crazy-Blonde the whole situation is very hypocritical, proving that at 22 she is still one of the most mature women left.

Crazy-Blonde has a conversation with Arie at the cocktail party about growing up at a bowling alley (how convenient) and the slew of men her mom brought in and out of her life and how none of them were true to their word and that’s why she reacted like a pouty brat the other night. He politely tells her to get over it, and I’m starting to think he’s seeing through her good looks to who she actually is. Or maybe he isn’t a fan of her boobs in this dress, because they look terrible. Whatever it is, we’re going to the rose ceremony.

Marikh, Ashley and Dead-Grandpa-Blonde are heading home. I don’t think anyone is surprised but I do feel bad for DGB. Next week I will try to actually learn the Blondes’ names because they are clearly not going anywhere. Arie and the girls are heading to Paris next week. I’m here for that.

2 thoughts on “Bachelor-Recap: Have you heard the one about the 5 identical blondes?”