Tonight, tonight, tonight, OoohhhOh! Who’s ready for the recap? Tonight’s thoughts are brought to you my brain on Sort This Out Cellar’s Rose Wine. For absolutely no reason in particular, it was just already in my wine cabinet! (I’m a member there, you should join too! No they are not paying me to say these things, I’m paying them to say these things.) I’m joined this evening by my pug Louise. She is not at all interested in this show, only interested in the warmth of my body as I force-snuggle her on the couch. Ready? Great! Here we go! 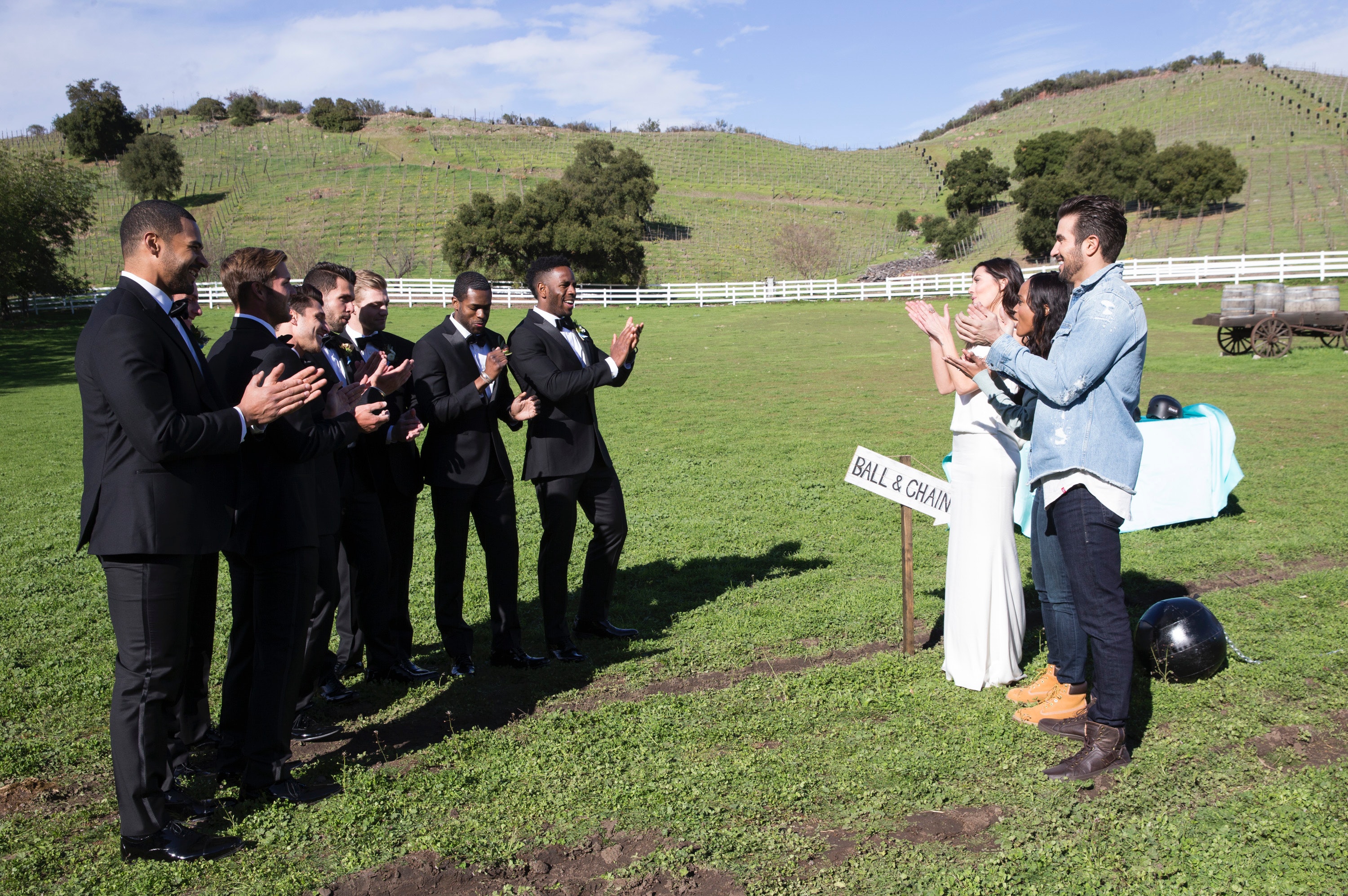 My DVR cut off the first 8 minutes, so I have zero idea what happened and I’m not going to worry about it. You’ve seen one episode of the Bachelorette, you’ve seen em all! When it returns from commercial Rachel and Bryan are helping Becca with an obstacle course . Ball and chain run, Cold feet ice bath soak, Crisco covered wall, Crawl through the mud, Find a ring without your hands, Propose to Becca, WIN!

Lincoln wins and gets to pose with Becca for a wedding portrait. Lincoln proceeds to use his win for a leg up the rest of the night. “We got married today so I get to sit next to you. We go married so can I steal you for a second?” Needless to say, the guys hate him. Becca gifts Lincoln their wedding photo (this will totally come into play later), and these two suck face like teenagers.

Becca and Jean Blanc have a conversation that really didn’t seem that important and they kissed. He goes on to receive the Group Date Rose and it took me by surprise but I think it was because he was not involved in the drama. Lincoln continued to rub his wedding photo in and it didn’t go over well. Eventually, Connor picks up the picture and throws it into the pool. Lincoln tells Becca he feels physically threatened and Connor tells  her this is not an accurate depiction of him. When she does offer the rose to Jean Blanc Lincoln’s face drops. He fully expected to get the rose.

The next morning Lincoln is recapping the destruction of this treasured photo and gives us our first tears of the season! I can’t take his tears seriously, but clearly this has rocked him to his core. I hope he can get through this. Just kidding, I really don’t care. 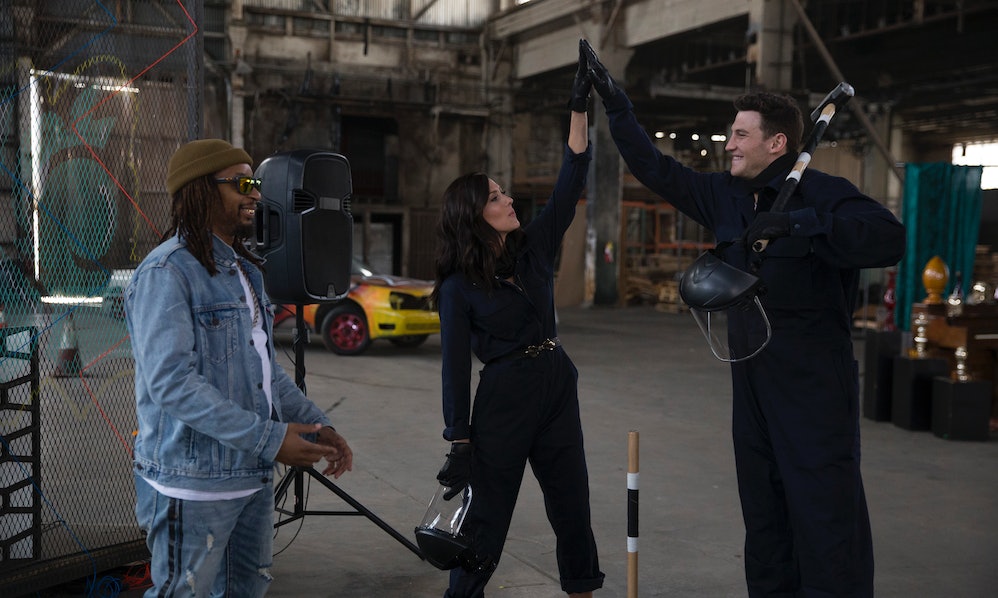 Blecca do not know what they’re doing on their date because it was planned by Chris Harrison. Chris Harrison is apparently a sadistic MF-er who really doesn’t like Becca. He planned a destruction date where Becca and Blake destroy a series of reminders of her relationship with Arie. I don’t know if you guys know or not but Becca was on The Bachelor, was proposed to, and was then UNPROPOSED to on NATIONAL TELEVISION! This date feels cruel, but she has a good time and Lil Jon Turns Down for WHAT! while they smash TVs, couches, and lots and lots of champagne bottles (RIP sweet, innocent champagne. You deserved better!)

Blecca go to Warwick to have dinner and she tells Blake this one-on-one was way more “her” than her first one-on-one with Arie. Blake tells her he was broken up with abruptly, similar to Becca. Blake had expressed love for this other girl, and then two days later saw text messages from her friends asking if she had broken up with him yet. It doesn’t sound like your breakup was filmed by a camera crew, Blake! They seem to get along fine, they smile a lot, there wasn’t a lot to say. He gets the rose. They make out like crazy in the streets. Let’s go to the next group date!

DODGEBALL!!! What could possibly go wrong besides EVERYTHING? The guys take a school bus to a school where a bunch of little kids pelt them with dodge balls, and then mention Becca dodged a bullet with the loser Arie. Next week I’m going to keep an Arie count. After their training session they go to SkyZone (just imagine trampolines literally on every surface) to have a Dodgeball Tournament. This date feels like blown knees and twisted ankles all over the place! The Green Team wins and they head to the after party. If you haven’t already, please take a moment to recognize Leo’s AMAZING curls up above. They’re glorious.

Alex makes light of the first group date and asks if it’s okay if the trophy is on the table or if they should hide it. She spends some time with Garrett and I’m pretty sure he doesn’t blink the whole time they talk. She likes him, a lot. Wills and Becca have a heart-to-heart about what they want in a partner and then a mouth-to-mouth for funsies!

We finally get some drama! Colton pulls Garrett aside to make a confession. He had a weekend fling with Tia, and it wasn’t serious but he thinks Becca should know. He goes on to tell Becca and she is SHOOK. SPOILER ALERT: He won’t go home and we know this because we’ve seen the clip of him telling Becca that he is a virgin.

Becca ultimately gives the rose to Wills but then heads out because she is still so distracted by Colton’s weekend with Tia.

COCKTAIL PARTY
Becca dances with Clay, Venmo guy wrote a poem, Connor has her throw his picture from the obstacle course in the pool. But, not to be outdone, Male-Model Jordan strips down to his skivvies and says ‘Tick Tock, Let’s Make It Rock!’ I’d like to make a statement here: I am not turned on by Jordan in his maroon boxer briefs still wearing his loafers. Jordan interrupts The Chicken guy’s time with Becca and steals her away to tell her he’s multi-faceted and he’s looking forward to having a Jordy, Jr. someday. The Chicken guy says Jordan’s behavior was disrespectful towards him which is a bold statement since this guy showed up in a chicken costume to get attention.

Becca goes to talk to Colton again and he re-enforces that he will always be honest and upfront with her and she’ll never have doubts, but she still has doubts because he spent a weekend playing under the shirt over the bra with Tia. (Side note: Tia is Raven’s Best Friend so the Bachelor incest in Arkansas is still going strong!) We’re heading to the rose ceremony!

That’s it for this week everybody! There wasn’t a ton of drama, and I always want more drama! Next week they’re going to play football, Tia is coming, and Jordan’s got 4000 matches on Tinder! Also, blood. Lots of blood. Buckle Up! See You Next Week!